Slavery is common in the supply chains of fish products. For salmon, the main areas of risk are the fish feed fed to farmed salmon and factory processing of tinned salmon.

We contacted New Zealand’s largest salmon brands to ask about their supply chains. In our guide below, we explain our findings and share tips on how to buy salmon whilst supporting the human rights of those involved in the supply chain.

In a hurry? Check out this summary (PDF).

Salmon sold in New Zealand can be either:

Wild-caught salmon is used in processed products, such as tinned fish and ready-made meals. Fresh or frozen salmon has generally been farmed.

Out of these, Alaskan salmon is the most common. We haven’t come across any evidence of forced labour in Alaskan salmon-fishing. While it’s clearly hard work (you can read about the experience here and here), those working on the boats freely choose to enter into it, and the pay can be quite good. Salmon-fishing conditions in the US Pacific North-West and British Columbia seem to be similar. Further, if the fish processing happens locally, salmon from these areas is very likely to be slave-free.

However, if the salmon is shipped to another country for processing, there is increased risk of slave labour. For example, processing factories in Thailand have been known to use forced labour.

We asked several brands about the origins and processing of their wild-caught salmon products – see ’What’s happening in their supply chains?’ below.

Farmed salmon sold in New Zealand tends to come from either local salmon farms, or farms in Norway or Australia. (We haven’t found farmed salmon from any other countries being sold here, but if you find any let us know!)

Slave-labour is unlikely to be used in the salmon farms of these countries – the Norwegian industry is highly regulated, and New Zealand and Australia have strong labour laws.

However, all farmed salmon is fed on fish meal and fish oil made from wild-caught fish, and this often comes from locations where severe abuse occurs.

If fish feed comes from Peru or the EU, it is likely to be free from slave labour. In Peru, the fishers are highly collectivised, and the fish meal factories are automated and require highly skilled labour. The EU fishing industry is also highly regulated.

But there can be significant slavery concerns with fish feed caught and processed in other countries. For example, Thailand (one of the other major suppliers of fish feed) is known to have cases of slave labour.

We asked New Zealand salmon farms where their fish feed is sourced from – see ’What’s happening in their supply chains?’ below. We also reached out to two companies selling salmon farmed overseas.

How to buy salmon without supporting slavery 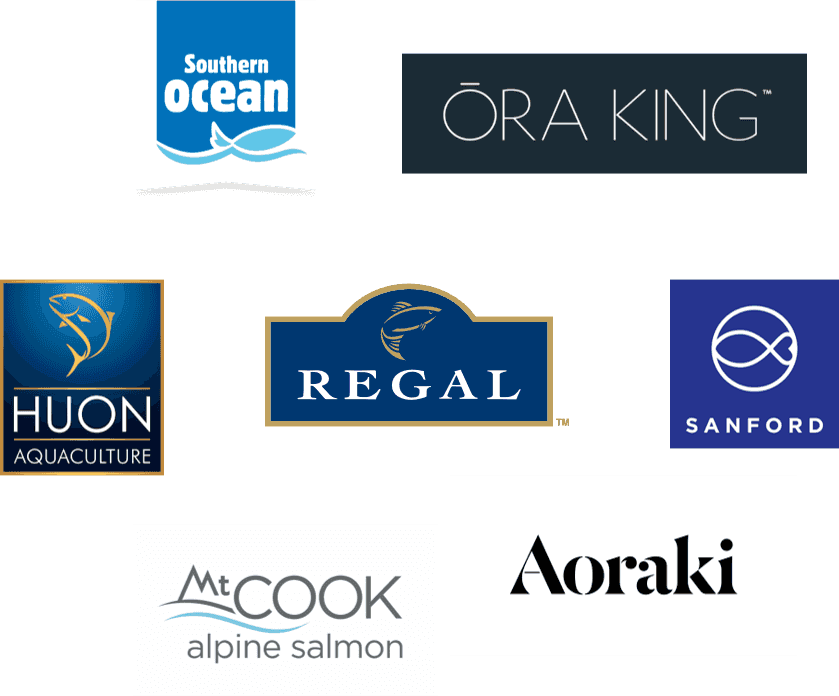 When researching the above brands, we found that the supply chains involved in their salmon products either use low-risk countries, or have processes in place to prevent slave labour. See ’What’s happening in their supply chains?’ below for more info.

*At last check (Sep 2020), we learned Sanford, Mt Cook, Aoraki, and the fish counters at PAK’nSAVE and New World were all currently selling slave-free salmon. This was due to the particular suppliers they happened to use at the time. However they haven’t made commitments to be slave-free like some of the other companies have, so we’re a bit hesitant about them in case they switch to an unchecked supplier in future.

What’s happening in their supply chains?

Below is a brief overview of what we found out about each company’s supply chains. For more detail see our research notes.

As described above, if salmon is both caught and processed within Alaska, it is highly likely to be slave-free. If Alaskan salmon is shipped overseas for processing, there is greater risk of forced labour.

We contacted John West, Sealord, Pams, and Countdown (they sell salmon under their own brand ‘Select’) to ask about their processes. We found that:

Note: John West mentioned above is the Australian and New Zealand company, not the John West brand in Europe (which is owned by a different company).

As described above, if the fish feed used at New Zealand farms comes from Peru or EU, it is likely to be slave free.

New Zealand King Salmon uses fish feed from Peru and the EU. In our communications with them, they seemed well aware of the issue of human rights abuses and are intending to continue sourcing from low-risk countries in future.

The brands Southern Ocean, Ora King and Regal are all by New Zealand King Salmon.

Sanford Bluff Salmon and Mt Cook Alpine also use fish feed from Peru and the EU. However, they hadn’t made ongoing commitments to use suppliers without slave-labour in future, so we’re slightly less confident about them.

We’re not sure where the fish feed Akaroa uses comes from. We contacted the supplier they use, and they (the supplier) seems somewhat aware of the issue of human rights abuses. For example, they don’t use any Thai-sourced fish due to the concerns there. This suggests Akaroa’s salmon is at reduced risk of slavery in its supply chain, but we can’t be confident as Thailand isn’t the only country with such risks.

Unfortunately we didn’t receive a response from High Country. We will update this guide if we hear back from them.

It is fairly likely their salmon is slave-free, as the EU does attempt to ban the import of products where forced labour has occurred. However, we can’t be sure without more information, and Ocean Blue didn’t reply to our queries.

Huon Aquaculture’s salmon is farmed in Tasmania in Australia.

Huon’s feed comes from two suppliers. One supplier sources fish from Peru and the EU, which as mentioned above, means the fish feed is likely to be slave-labour free. The other supplier sources fish from several low-to-medium risk areas, and conducts internal audits regularly. We’d prefer third-party audits, however what they have in place at present feels sufficient, given they are operating in low-to-medium risk areas.

Farmed salmon sold at the supermarkets

The salmon at Countdown’s fish counters comes from either New Zealand King Salmon or from Huon.

The salmon at PAK’nSAVE and New World’s fish counters comes from either New Zealand King Salmon or Sanford.

All three of these suppliers (New Zealand King Salmon, Huon, and Sanford) are likely to be slave-labour free as discussed above.

For more information on this topic:

For other types of fish products, check out these pages:

Our bottom line is that fish, cocoa and sugar should be free of child and slave labour right back to the original boat or farm.

Within this, where possible we also:

Find out more about our principles and check out our other guides.